It hardly seems like another month has flown by but it has. I hope to see a good turnout at this month's get together. Since I had no complaints (a rarity) about opening last month's Reminder I will again use Text Edit to compose it.

I don't know if any of you have tried the software I mentioned last month, Snapheal, but I have been having fun doctoring some old photos, as well as a new one I will use as the Photo of the Month at the tail end of this Reminder.

This month the main door prize will be an external hard drive. Other giveaways include a speaker for an  iPod or iPhone, a donated ream of copy paper, a portable mobile charger for iPod or iPhone, and some more AA batteries. The usual rules will apply; each paid membership will receive one raffle ticket but additional tickets can be purchased at the cost of  $1 or 6/$5. Only one prize per membership still applies, of course.

No User Group Discount List this month, but below are some articles some may find of interest.

Greenlight Findings from a survey undertaken by leading independent digital marketing agency, Greenlight, indicate that Google+ might be more successful than most have initially speculated and that Facebook could potentially capture close to a quarter of the search market globally were it to launch a search engine of its own tomorrow. This market share would make Facebook the second most utilised search engine in every major market except for China, Japan, and Russia, where it would occupy an uncontested third place.

Sensosolutions of innovative IT systems for sports analysis, motion and performance measurement, released a new version of SensoGlove, the world's first digital golf glove. The new advanced SensoGlove now offers a longer battery life and increased sensitivity for a more accurate pressure read to ensure a consistently smooth and powerful golf swing for greater distance and lower scores.  Just in time for Father's Day, the new version of SensoGlove was created based on feedback from international PGA professionals.

18 ways to view the ~/Library in Lion

As you know, Apple has chosen to hide the user's Library folder in Lion.  We were quickly told that we could hold down the option key when accessing the Finder's Go menu to see the Library.  MacWorld published an article listing 17 other ways to access that library folder.

GraphicConverter has been completely rewritten and now supports 64-bit and 32-bit Intel-based Apple computers. The new GraphicConverter 8 is now able to take full advantage of the latest 64-bit systems, allowing you to work with larger files and in less time. Lemke Software offers this major new release to all existing Version 7.x customers free-of-charge, and it is downloadable from the Updater within your application menu.

Here you go, on the day Facebook goes public, in one of the biggest stock market IPOs in history, we're asking should brands bother with Facebook advertising if 44% of people say they would never click on a sponsored ad? A global survey undertaken by the independent digital marketing agency, Greenlight, reveals 30% of people 'strongly distrust' Facebook with their personal data whilst 44% say they would 'never' click on Facebook sponsored ads, all of which indicates Facebook's advertising programme has an upward struggle. It's going to get interesting!

It's a wonder things don't change! After repeating the same sad news week after week, month, year after year you'd think someone would take notice. Oh well, we'll keep plugging away ... here are just a few from this week's cache

* eBay tries to shut down AuctionBytes for phishing

Just in case you haven't seen this video, I wanted to provide a link to the user group community.

Are you inundated with catalogs, offers, and direct mail junk? Is the postal mail box of an elderly relative or friend stuffed to the brim with 'Publishers' Clearninghouse' envelopes?  The web site DMAchoice.org could be just what you're looking for.

MacAppBlocker for OS X enables users to block access to any application by placing it on a Blocked App list that is password protected. A safer and more practical solution for insuring privacy than creating multiple login accounts, MacAppBlocker allows the user to share their computer or leave it unattended, while being assured that sensitive apps and documents cannot be opened.

This article on CNet is actually titled "Cloud-based storage options for Mac OS X." But I don't like long titles.

Appsoft Studio has announced the release of Folder Factory 1.0, an app for changing folders' design on Mac OS X. The new application is an excellent tool for enhancing folder icons and has some great features. Attaching pictures, applying colors and adjusting their intensity will help to compose unique folder icons for many Mac users.

Neatberry has announced the release of Fumy 2.2 for Mac OS X. Fumy is an unusual bitmap editor focused on special effects. The main feature of the application is the 'Smoke' tool, since version 2.2 another great tool -- the 'Lightning' tool is available.

Photo of the Month

A couple of months ago my Pom, Bruno, died. This week I acquired a new Pom. Here is the photo I took of him

and a similar pose after removing the lines from the tile floor with Snapheal. 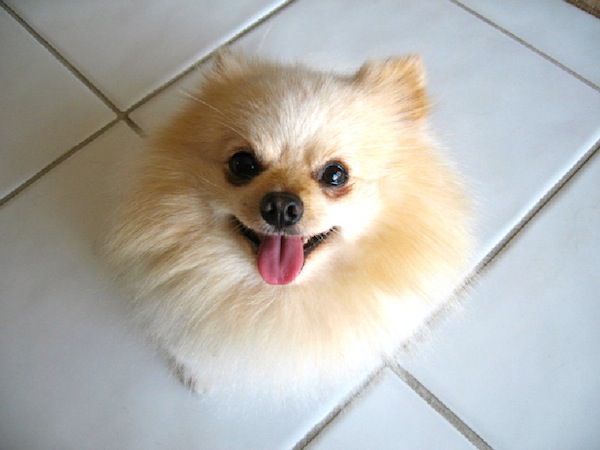