This month, for the first time in quite awhile, we will proceed without the services of our resident guru, Dean Hoffmann. Our meeting night falls on his and wife Jackie's wedding anniversary and showing his good sense he has chosen to spend it with her rather than with us. I'm sure you all will join me in wishing Dean and Jackie many happy returns. I don't know the number of the anniversary but it's got to be up there (Dean is older than he looks.... or acts). In his stead member Dave Glassman will give a talk on his recent Mount Everest Base Camp Trek seen through video and photos. He will be glad to talk about how to organize, edit, add voice over and adding music to the video. As a preview of some of the wonderful photography we will see take a look at the Photo of the Month at the end of this epistle.
Here is some info on the Apple Logo that I found interesting: 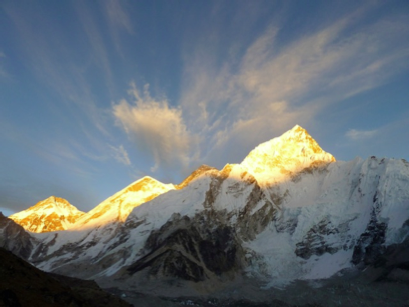