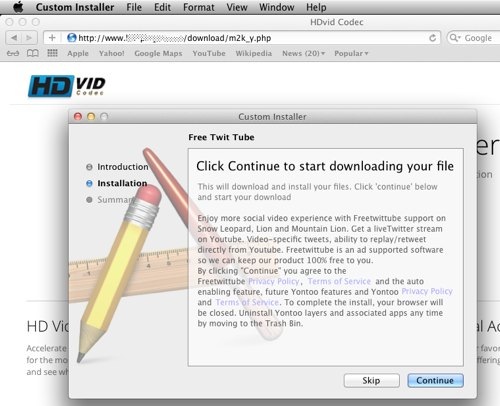 A new piece of adware is apparently circulating which affects the web browsers on OS X devices, causing them to display advertisements on webpages with no ad code implemented. The report on the new Trojan comes from Doctor Web, a Russian security firm (via TNW), who report that the Trojan which is called Trojan.Yontoo.1, can inject code to Chrome, Safari and Firefox browsers which causes them to display advertisements.

The Trojan works by utilizing a variety of websites, sometimes displaying innocuous content like movie trailers, and tricks users into downloading what they think is a video plugin called Twit Tube. Instead of a movie plugin, the program then downloads a piece of injectable code for the Chrome, Safari or Firefox browsers, which then causes ads to display on any pages to which the user browses. The ads are targeted towards the site that is being browsed, as in the example given by Doctor Web, the ads for an iPad appeared on the Apple website.

The malicious code is only at the user end, rather than acting by affecting the websites themselves, and can be avoided by not downloading any movie plugins which distribute the Trojan.
Source: http://www.applebitch.com/2013/03/21/new-trojan-hits-mac-web-browsers/

How to Connect USB Devices to macOS VirtualBox VM

Did you manage to set up a macOS virtual machine on your Windows PC only to realize that your USB devices aren’t showing up in it? While running macOS in a guest environment with a tool like VirtualBox is one thing, configuring it and making proper use of all the available features is another. It’s... Read More

How to Mirror Your iPhone to LG TV

Did you know you can mirror your iPhone or iPad to many modern LG TV’s? Similar to how you mirror the iPhone screen to an Apple TV device, many modern smart TV’s also directly support the ability to mirror a device screen directly to them. If you’ve been thinking about purchasing an Apple TV to... Read More